COMRADE M.KRISHNAN , SECRETARY GENERAL , CONFEDERATION ADDRESSING THE RELAY HUNGER FAST AND GATE MEETING GOING ON IN FRONT OF GUWAHATI (ASSAM) HPO ON 16.11.2017 DEMANDING ACTION AGAINST SSP WHO MISBEHAVED TO EMLOYEES. 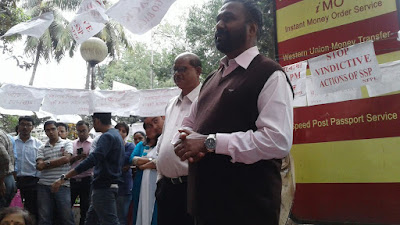 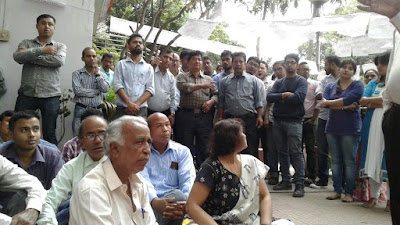 After that Indefinite Strike will be declared

4. Implement CSI, and RICT only after providing all required infrastructure including band width and stop harassment , victimization in the name of new schemes, technology induction, under contributory negligence factor and trade union victimization.

5. Stop out sourcing privatization and Corporatization.

6. Payment of revised wages and arrears to the casual, part time, contingent and daily rated mazdoors as per  6th & 7th CPC  and settle other issues of Casual Laboures.

10.  Stop move of diversion of business of P.O SB Schemes to Banks (Nationalized and Private)

13. Finalization of Recruitment Rules of AAOS IN Postal Accounts with 40% S.C.F quota as approved by DOPT.