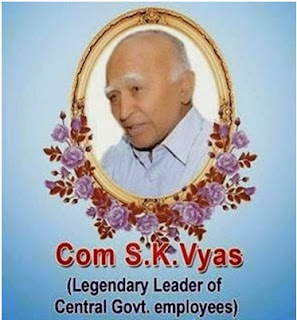 Com. Vyasji was a friend, philosopher, guide and everything for the Central Govt. Employees movement.  In the more than six decades long trade union life, Com.Vyasji endeared himself to every section of the Central Govt. Employees.  His death has caused irreparable and irreplaceable loss to all of us.  He was a great leader, symbol of simplicity, a gem of a person and a leader who is down to earth, extremely polite, kind hearted and compassionate; one of the finest human being, tallest leader, a gentle mentor and a legend.
He is in our hearts!  His memories will be forever with us!  His long saga of struggle and sacrifice for the Central Govt. employees and pensioners will inspire the generations to come.
The National Secretariat of Confederation of Central Govt. Employees & Workers calls upon all affiliated organisations and C-O-Cs to observe the 5th Death anniversary of Com.S.K.VyasJi as “S. K. VYAS JI REMEMBRANCE DAY”.