NEW DELHI: The government may raise the minimum wages in the country by
as  much as 25% and also make them binding on all states, a move aimed at
improving  the lifestyle of the poor and giving an indirect boost to the rural economy.

A senior government official told ET that the labour ministry is considering
three groups for states and union territories based on the per capita income
and  minimum wages for the unskilled, semi-skilled and skilled category
of workers in  each of the provinces.


The ministry recently increased the National Floor Level Minimum Wage
to Rs  160 per day from Rs 137, with effect from July. This translates into a monthly
salary of Rs 4,800 for an unskilled worker, but is only advisory and is not
mandatory for states to follow. As a result, wages are very low in some states
leading to unrest among workers. 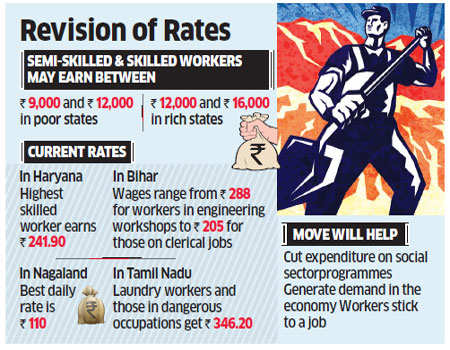 According to the official
, who spoke on the
condition of
anonymity, the
classification and
the changes to
make the wage levels
binding on states
would require
amendment to  the
Minimum Wage
Act, 1948. "We are
working on a formula
to arrive at minimum
wages for unskilled
workers. This could
go up to one-and-half times
in  semi-skilled category
and may be two times
for skilled workers in that state,"  the official said, adding that the wages would be revised
at regular intervals.


A back of the envelope calculation suggest that states like Goa, Delhi, Sikkim,
Chandigarh, Pondicherry and  Maharashtra, with highest per capita income in
the country, would be the first  category where minimum wage for the unskille
would be in the range of Rs 8,000  - Rs 9,000.

For states like Bihar, Uttar Pradesh, Manipur, Assam and Jharkhand, with
least per capita income, the minimum wage could be around Rs 6,000 a month
, an  increase of 25% based on the recently raised National Floor Level Minimum Wage.
Going by this, minimum wages would range  between Rs 9,000 and Rs 12,000 for
semi-skilled and skilled workers in poor  states and between Rs 12,000 and Rs 16,000
in rich states. The Centre hopes  revising the wage rate will help the government,
as the step will give room to  cut expenditure on social sector programmes and
generate demand in the economy.  It could also help ensure that workers stick to a job
and not switch over in  lieu of differential wages.


"Most importantly, unskilled workers may get motivated to move into  semi-skilled and skilled category for a better lifestyle once the fixed wages  are in place," the official added. The move may, however, not go down well with  trade unions which have been demanding a minimum wage of Rs 15,000 a month, a  level the government feels is unrealistic and could act as a deterrent for  employers. Minimum daily  wages vary widely from state to state: In Haryana, the wage for the highest    skilled worker is Rs  241.90, while in Bihar, which supplies the largest number of migrant workers,  wages range from Rs 288 for workers in engineering workshops to Rs 205 for those  on clerical jobs.


In Nagaland, the best daily  rate is Rs 110. In Tamil Nadu,  laundry workers
and those in dangerous occupations get Rs 346.20, but most  others draw less than Rs 300.
Source :http://economictimes.indiatimes.com/
Posted by p4chq blog.spot at 11:09 PM