Pay Commission Award To Get Cabinet Nod In June: PMO 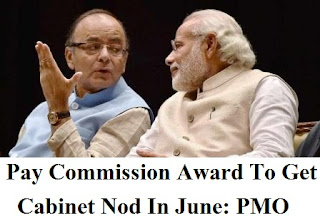 The proposal is almost ready to be recommended by the Empowered Committee of Secretaries on the Seventh pay commission recommendation, according to the PMO official.

There were some disputes among the central government employees’ bodies about the Pay Commission recommendations, which are under consideration of secretaries committee.

Following the context, the finance ministry sent an interim report on the proposed pay structure, including the disputes surrounding it, to the PMO.

PMO sent it back to the ministry with instruction to address the genuine concerns raised by stakeholders and accommodate their demands as much as possible. After these processes, it will be sent to the cabinet in June, the official said.

It is likely to take another 45 to 60 days to settle the issue, in the main time, the model code of conduct, which is currently in place for five states assemblies’ poll, which will end May 21, so,that’s the right time to implement the Seventh pay commission award in June, according to the official.

This means although the new pay structure is to be in place since July 1, the central government employees may start drawing the increased salaries from January with arrears of the previous six months. But the House Rent Allowance (HRA) will be paid from the date of the Seventh pay commission award implementation.

The Seventh Pay Commission headed by Justice A K Mathur recommended the minimum basic pay of central government employees is Rs 18,000 per month while the maximum is Rs 2.25 lakh per month, its increased the pay gap between the minimum and maximum from existing 1:12 to 1: 13.8.

“All pay commissions made up pay gap between employees and higher officers from second Pay Commission 1:41 ratio to Sixth pay commission 1:12, except it,” said the official.
Read at : The Sen Times