KIND NOTICE TO ALL MEMBERS OF AIPEU POSTMAN & MTS UNION

SHEDULED AIC IS POSTPONED DUE TO CORONA PROBLEM FURTHER DATES WILL BE
INTIMATED. TENTITIVELY IN THE END OF AUGUST OR SEPTEMBER THIS IS FOR UR KIND INFORMATION.
Posted by p4chq blog.spot at 1:05 PM No comments: 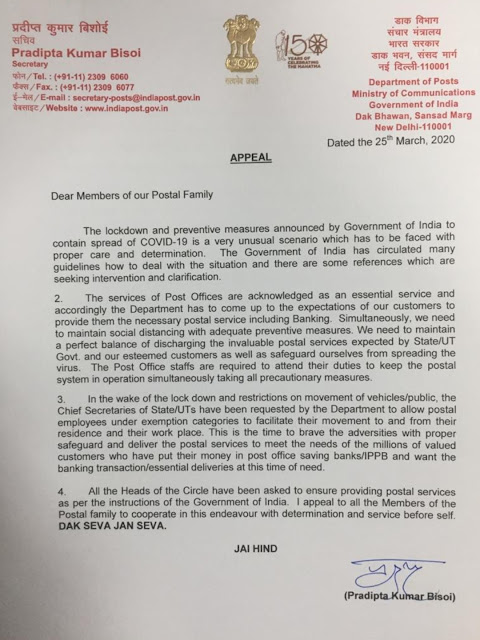 Email ThisBlogThis!Share to TwitterShare to FacebookShare to Pinterest
GUIDELINES FROM MINISTRY OF HOME AFFAIRS DATED: 24.03.2020 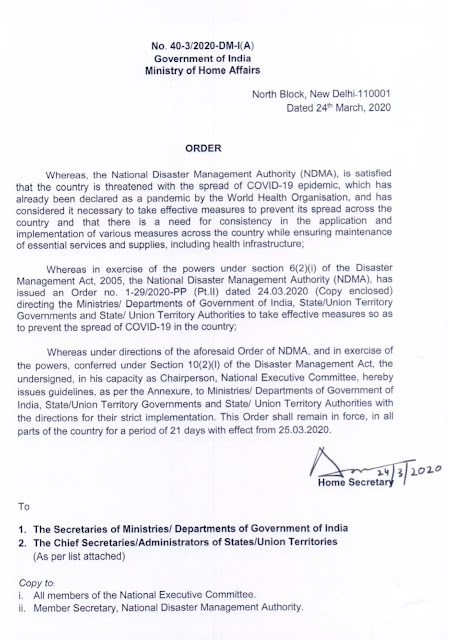 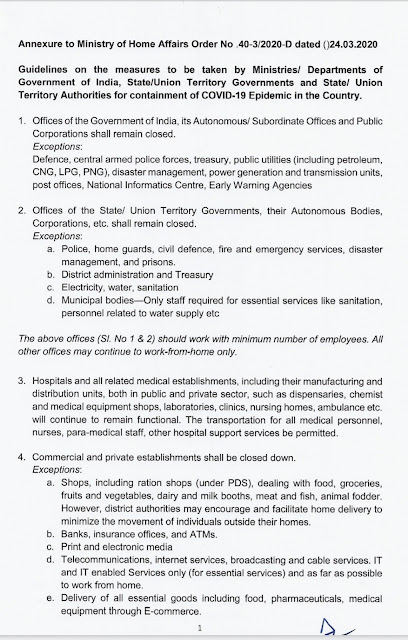 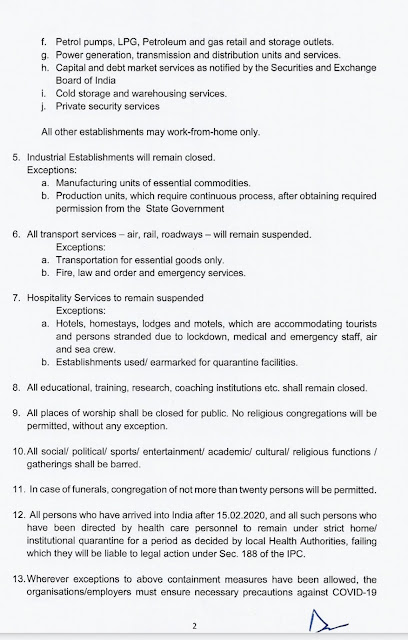 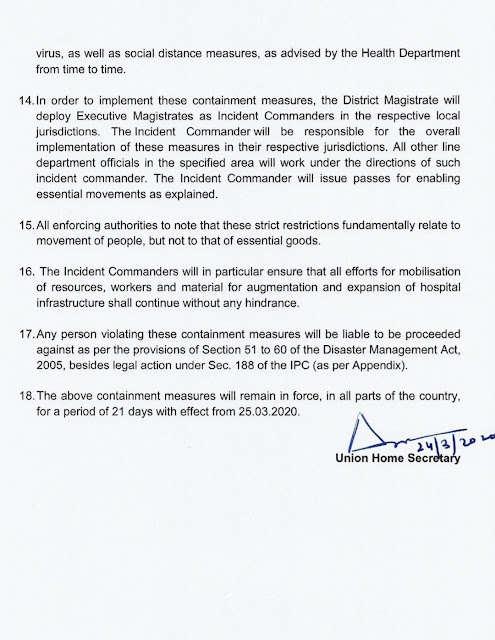 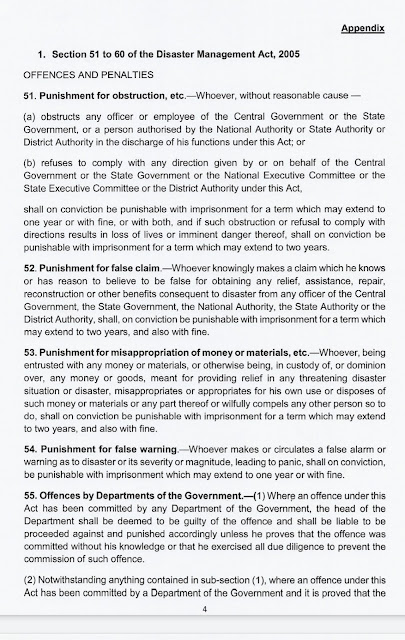 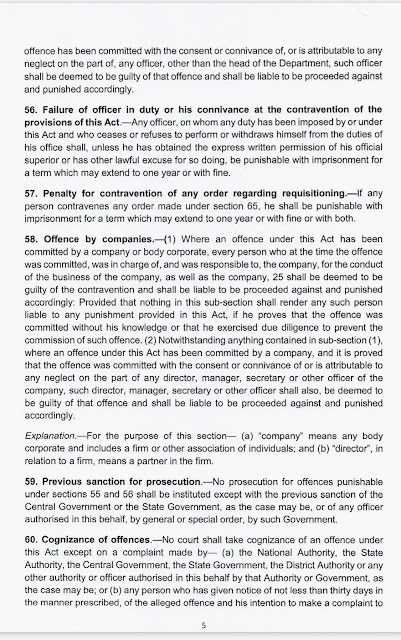 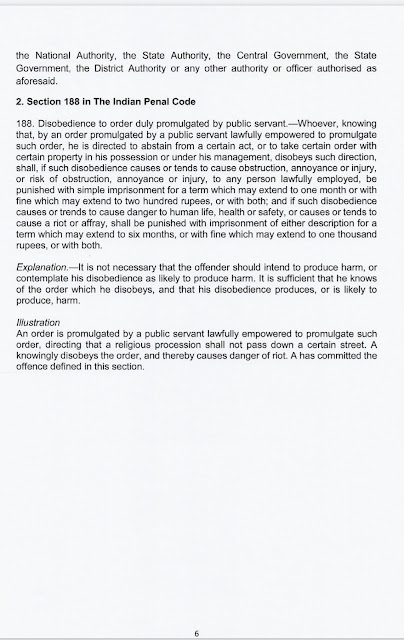 Email ThisBlogThis!Share to TwitterShare to FacebookShare to Pinterest
INSTRUCTIONS REGARDING HANDLING SITUATION AND DISRUPTION ON ACCOUNT OF COVID-19 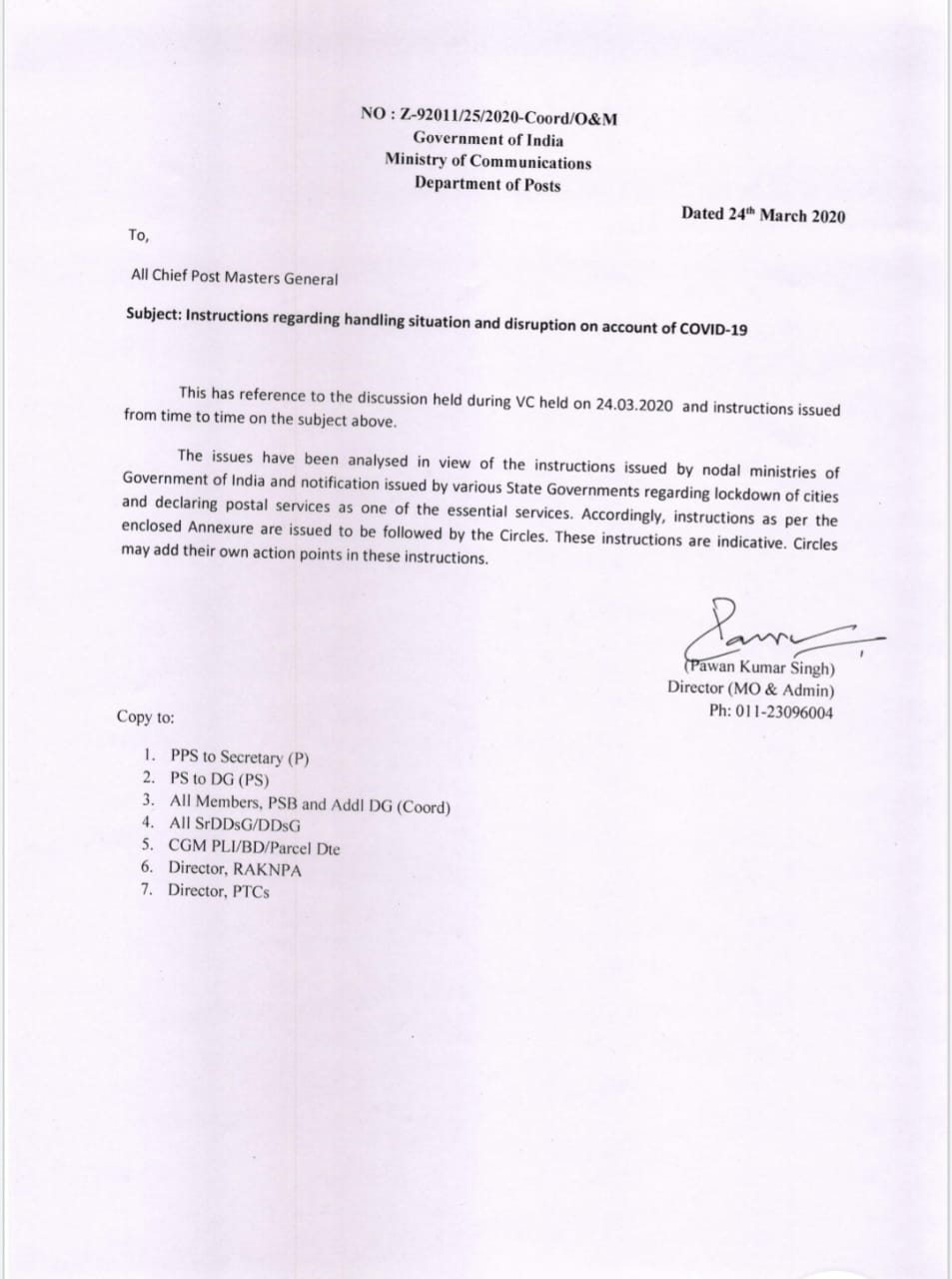 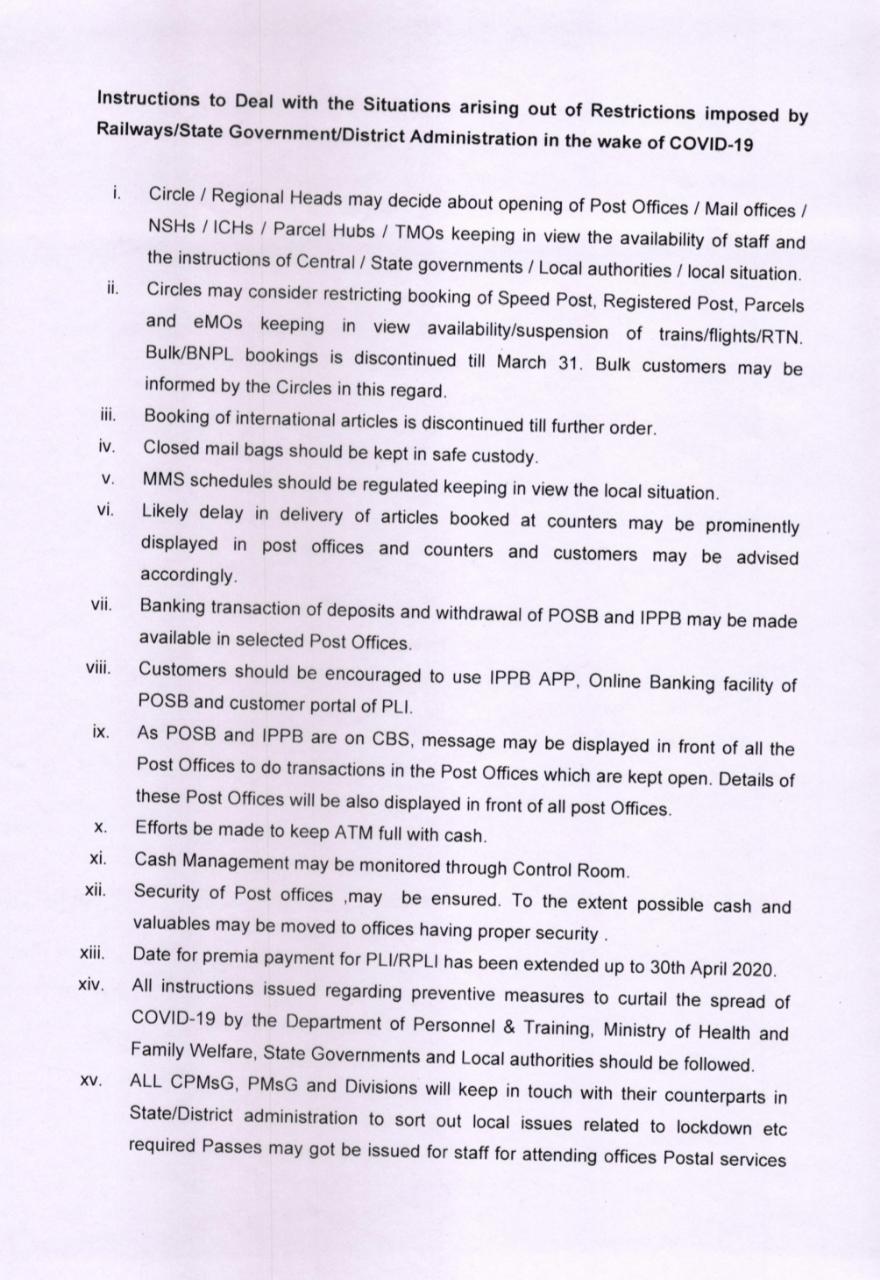 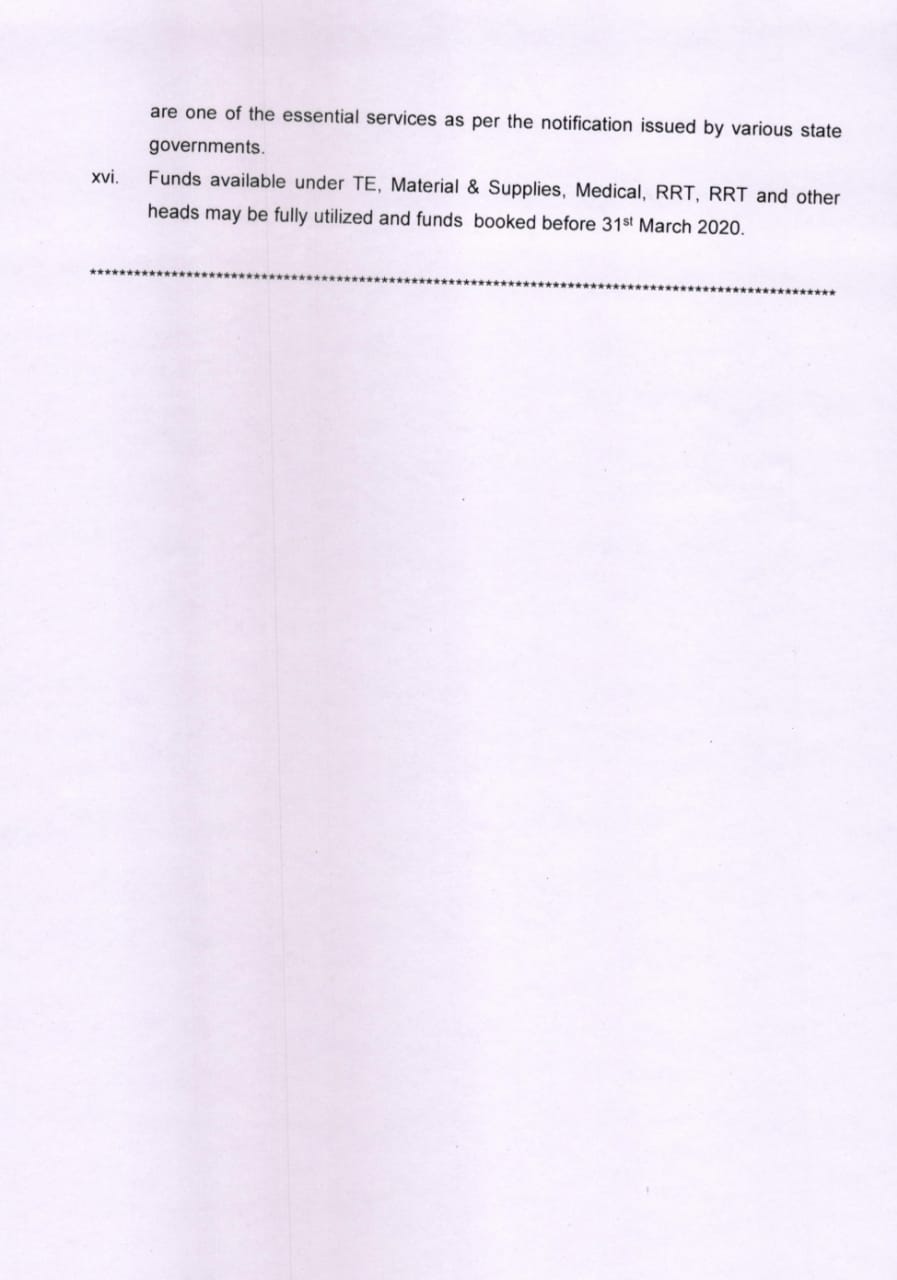 Email ThisBlogThis!Share to TwitterShare to FacebookShare to Pinterest
PREVENTIVE MEASURES TO CONTAIN THE SPREAD OF COVID-2019 - DIRECTORATE INSTRUCTIONS DATED 23.03.2020 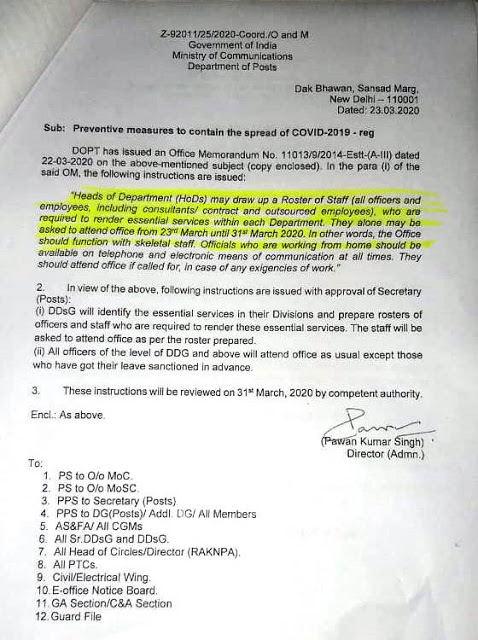 With deep concern, we are presenting the facts to the kind knowledge of the Department to re-consider the decisions already taken in connection with functioning of Post office through out the country in the name of age old 'essential service' slogan, there by inviting greater troubles and life risk on the days to come, not only to the employees, but also to the common public, which is against National interest at this crucial juncture.

To your knowledge, the response of various Indian states to COVID-19 will differ as the poorest states have the weakest capacity to deliver health services. As per the expert reports of Health Ministry, after the largest single-day increase in the number of novel coronavirus cases in India, it has never been clearer that the pandemic is upon us and the next few weeks are going to throw up a scenario that many still find hard to imagine.

Italy discovered its first case 10 days after South Korea. For another 20 days it had less than 10 cases, even as South Korea’s case count began to rise steadily. But then in a span of one frightening week, Italy’s case count multiplied a hundredfold.  India needs to try to move its own growth curve away from the Italy trajectory, and fast, with strict implementation of the social distancing measures it has already announced, if not even stricter lockdowns.

At this rate of growth, and assuming the 3.4 per cent fatality rate relative to confirmed cases calculated by the World Health Organization, India is headed for nearly a million confirmed cases by the end of May and over 30,000 deaths. These are conservative estimates. A team of bio-statisticians used predictive modelling and estimated that the number could be even higher, reaching nearly a million cases by 15 May instead.

Realising the situation, when the Country itself announcing complete lock outs for social distancing, when almost all the States  announced curfew and complete blocking of towns and districts and announcing 144 Act , not to allow even five people to gather in a single place, when public/private  transport systems, including the most essential department Railways completely closing down, it is pathetic that the Post offices are running , gathering the public in large in a single place , spreading with Corona virus in large form, against the Nation's interest.

There is no relevancy in running the Post offices, when there is complete close down and arresting of movement.  We cannot book, receive or transmit any mail. Except for withdrawal of money from Savings account, there is no need of P.O.s to open for public, for that HPOs at HQ may function with skeleton staff.

We do not understand, what is the relevancy of our Department to continue to be named as 'Essential Service', when  almost there is no personal mails from any public and everything termed as business ; named as Business Directorate ; Parcel Directorate etc and fixing targets for procuring business and acting as agents to even petty shop owners for any sales on commission .

It is the habit of our Department, when asking for facilities for a service Department, terming as Business and when asking for the facilities of Commercial establishment, terming this as essential service. This is nothing but, sheer exploitation of labour. Whatever it may be , now the situation is very serious, dangerous and involving life risk, and if the Post offices are opened , it will definitely act as a hub for easy transmission of Corona virus.

It is ironical to note that different yardstick was taken by the circles, regions and divisional heads with regard to number of offices being opened during this period. In some circles, there seems no action at all. The fatal death of a Postal employee in Punjab circle as reported in the newspaper cannot be ignored to. The value of human life is more precious and it should not be compromised in the sake of some prestige. Even though the Department decided to open the post offices, it could not provide minimum safety measures to the staff and also to the public attending the POs.  There is no logic to open the delivery post offices when there is no receipt of mails due to disruptions of transport facilities. There is no meaning at all to open the RMS and sorting offices.

When the nation is under the grip of fear due to the spread of corona virus, we should not contribute the same by opening the post offices and do harm to the nation. If the opening of post offices mitigates the issues and arrest the virus, there is a meaning for such action by declaring our service as essential service. When we open the shop and invite more people to spread the virus, of course, it is pathetic and doing harm to the nation.

Hence, in the interest of Nation, public and working staff, we are demanding the complete closure of all Post offices throughout the Country, till the Govt announcing normalcy for any free day to day activities. This is for the interest of the Nation as well as officials who are working under the grip of fear when the Govt is insisting to maintain social distance. The whole family of the employees are in distress tension and agony. Hope our demand is considered immediately, otherwise, there is no other go except to take some hard decisions in the interest of Nation.

Hoping for kind action and a line in reply.

With regards,
Yours Sincerely,
(R.N Parashar)
Secretary General,
NFPE
Posted by p4chq blog.spot at 11:25 AM No comments:

Email ThisBlogThis!Share to TwitterShare to FacebookShare to Pinterest
PAYMENT OF WAGES TO OUTSOURCED PERSONS OF MINISTRIES / DEPARTMENTS AND OTHER ORGANIZATIONS OF GOVERNMENT OF INDIA DURING LOCKDOWN PERIOD DUE TO COVID-19 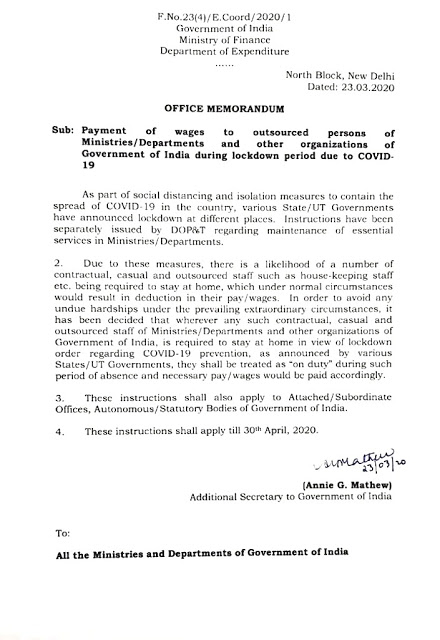