About 8 lakhs Central Government employees took part in the 48 hour (two day) general strike yesterday and today organised by the Indian working class as per the call of the Joint platform of 11 Central Trade Unions of the country. Besides 5 lakh Defence Civilian employees are also reported to have participated in this historic action.

The Strike was total and cent per cent in Income tax and Postal departments. The participation ranged from 60 to 90% in other Government of India organisations except in the Central Secretariat. As per the report, the strike was total in Assam, Tripura, West Bengal, Orissa, Bihar Andhra Pradesh, Tamilnadu, Kerala, Chhattisgarh and 60 to 70% in Rajasthan, Gujarat, Madhya Pradesh, Punjab, Haryana and partial in other States.

In Delhi, the Income tax and RMS offices of the Postal Department virtually remained closed. Not a single employee reported for duty in these offices. Many offices of the Civil Accounts and Post offices in Delhi also did not function on these two days.

Many establishments of Printing and Stationery, Indian Bureau of Mines, Geological Survey of India, Medical Depots, Customs, Ground Water Board, ISRO, Directorate of Marketing Inspection, Civil Accounts, Central Public Works Department remained closed throughout the country on both the days.
The National Secretariat of the Confederation places on record its sincere gratitude and appreciation of the efforts undertaken by the State/Branch level leaders to make this historic action of the Indian working class a resounding success by eliciting the total participation of the Central Government employees. The success of the two days strike action will no doubt embolden the employees and workers to chalk out intensified action programme including indefinite strike action to compel the Govt. to rescind the anti-people economic policies pursued since 1991.
K.K.N. Kutty
Secretary General.

Posted by R.SEETHALAKSHMI at 10:26 AM No comments:

Central Trade Unions rejected the Government’s, appeal to call off the strike.

10 Crores workers will participate in the strike.

Against the exploitation of the virtual capitalism,
It’s the expression of our inner tumult.
Against the commodifying everything,
It’s for changing everything.
Against the apolitical disintegration,
It’s the moulding of the common man and working class of India.
If winter comes, can spring be far behind?
Let us join the mass upsurge on Feb 20, 21 and continue the fight
to change the capitalist-oriented Imperialist globalization policies

Posted by R.SEETHALAKSHMI at 1:13 PM No comments:

NOTICE OF TWO DAYS STRIKE ON 20th & 21st FEBRUARY, 2013.
LETTER FROM THE DEPARTMENT
No.8-4/2013/SR
Government of India
Ministry of Communications & IT
Department of Posts

Sir,
With reference to letter No. JCA 2013 dated 22nd January, 2013 from Postal Joint Council of Action stating that all the Postal/RMS/MMS/Administrative and Postal Accounts Employees and all the Gramin Dak Sevaks will go on two days strike on 20th & 21st Feb, 2013 in support of Charter of Demands enclosed with the letter referred to above. Part-I of The Charter of Demands relates to the entire Government of India and perhaps will be examined by Department of Personnel and Training. Part-II of the Charter of Demands relating to the Department of Posts is being examined by us. The progress in respect of these demands will be intimated to you shortly.

2.         As you are aware the Department of Posts has a well established system to resolve the demands of the employees through discussions across the table. In the recent past, periodical meetings granted by Secretary (Posts),JCM Standing Committee Meeting and JCM Departmental Council Meetings were held where a number of issues have  been discussed  in detail and the minutes has been issued to all concerned for solving staff matters. It is felt that no fruitful purpose is served by agitation especially when the problems can be mutually discussed and resolved. Such disruptions also hamper our business and goodwill.

3.         In view of the above, it is requested that both the federations and its affiliated Unions may call off the strike so that the Postal Services are not hampered and public is not put to any avoidable inconvenience. 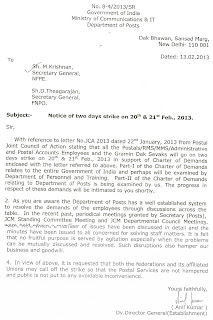 Posted by R.SEETHALAKSHMI at 2:40 PM No comments:

Email ThisBlogThis!Share to TwitterShare to FacebookShare to Pinterest
Posted by R.SEETHALAKSHMI at 11:36 AM No comments:

Preparations for the successful implementation of the Two Days strike on 2013 February 20 & 21 are going on full swing all over the country. India and world will be witnessing one of the biggest strike of the united working class on February 20 & 21.  More than ten crores workers will participate in the strike.  All the Central Trade Unions including INTUC, BMS, AITUC, CITU, HMS etc, Employees Teachers Federations, Public Sector Organizations are participating in the strike. The main demand is reversal of the anti-labour, anti-people, neo-liberal economic policies of the Central Government.


Confederation of Central Govt. Employees & workers have already endorsed the decision of the Central Trade Unions and Federations, Strike notice was served by confederation to Cabinet Secretary and the affiliated unions to the concerned Head of Departments on 22.01.2013. In addition to the common charter of demands raised by the Central Trade Unions, Confederation has included its 15 points charter of demands also in the strike notice.  As far as Central Govt. Employees are concerned, the February 20, 21 strike is a continuation of the 12th December 2012 strike.  The demand for appointment of 7th CPC and merger of 50% DA is still pending. We have to continue our struggle till these demands are accepted by the Government. Confederation National leaders campaign programme is going on in all states.


In Postal, both National Federation of Postal Employees (NFPE) and Federation of National Postal Organizations (FNPO) are participating in the Nationwide strike under the banner of Joint Council of action.  In addition to the common charter of demands, JCA has raised the Postal oriented demands also, including wage revision, DA merger, abolition of Posts, National Postal Policy, GDS demands, Casual Labour issues, cadre restructuring, revision of OTA rates & compassionate appoinments. The Joint strike notice has been served to the Secretary, Department of Posts on 22.01.2013. Copy of the strike notice and charter of demands are already published in websites and also in the journals of all unions and Federations.  As part of the campaign programme, All India leaders of NFPE & FNPO will be jointly addressing the campaign programmes in all Circles. Comrades, when the entire workers of our country are unitedly fighting a historic battle against the retrograde policies of the Government, the entire postal & RMS employees including Gramin Dak Sevaks shall join this mass upsurge and make the 48 hours strike cent per cent. Move to grant license to couriers, abolition of posts, denial of the legitimate demands of the Gramin Dak Sevaks etc. are all due to the neo-liberal policies of the Central Government and in order to change the policy, the united struggle of the working class is the only alternative.  NFPE calls upon the entirety of Postal & RMS Employees including Gramin Dak Sevaks to join the strike en-mass and make it a grand success.


NFPE FEDERAL COUNCIL MEETING:  The highest policy making body of National Federation of Postal Employees (NFPE), the FEDERAL COUNCIL  will be held at Hyderabad (Andhra Pradesh) from 9th to 12th June 2013, ( 4 days) Federal Councilors from all the affiliated unions of NFPE will be attending the Federal Council.  Various Political and Trade union leaders and leaders of the Fraternal Organizations will address the Federal Council.  Details will be published later. The Circle Coordinating Committee of Postal & RMS Unions (NFPE), Andhra Pradesh Circle has already started preparations for making the four days Federal Council, a memorable event in the history of Postal Trade Union movement.

AIPEU-GDS(NFPE) FIRST ALL INDIA CONFERENCE:
The first All India Conference of All India Postal Employees Union GDS (NFPE), an associate member of NFPE, will be held at Chennai on 2013 March 21st & 22nd. About 1000 delegates and visitors will attend the Conference.  The Reception Committee headed by Com. K.V. Sridharan, Ex-General Secretary, P-3(Chairman) and Com. K Raghavendran (Ex-Secretary General NFPE) are making hectic efforts to make the conference a grand success. Reception Committee is publishing a Souvenir to commemorate the Ist  AIC, and also as a part of resource mobilization .  Without the help of other Circles, it will be very difficult for Tamilnadu comrades to raise funds for such a big conference within a short period.  The Reception Committee has already sent the Tariff and order form of the souvenir to all. NFPE, Central Headquarters, request all the Circle/Divisional/Branch Secretaries to make sincere efforts to secure maximum advertisements to the souvenir.


NFPE EASTERN ZONE STUDY CAMP:
After successful conduct of the South Zone Study Cam,p at Chennai and Central Zone Camp at Vidisha (MP). The Eastern Zone Study Camp of NFPE will be organized at Guwahati (Assam) on 2013 April 27th to 28th.  About 200 delegates from Odisha, Jharkhand, West Bengal, Assam and North East Circles will attend the two days Camp.  Detailed circular showing the number of delegates from each affiliated unions from each circle etc. is being sent separately.  All General Secretaries and Circle Secretaries should ensure the participation of delegates as per the quota allotted.  Delegates may be instructed to book their up and down tickets immediately. Northern Zone Study Camp will be held in the Uttar Pradesh during the month of May 2013, venue of the Western Region Study Camp will be announced shortly.


As you are aware the South Zone Study Camp of NFPE was held at hennai and Central Zone Study Camp was held at Vidisha (M.P) successfully.  The next camp for East Zone will be held at Guwahati (Assam) on 27th & 28th April 2013. Delegate from affiliates of NFPE from West Bengal, Orissa, Assam, North East and Jharkhand shall participate in East Zone Study Camp.


The number of delegates allotted to each circle union is furnished as below:

In addition all General Secretaries of the above unions shall attend the camp.


Circle Secretaries are requested to select the delegates of their unions immediately and instruct them to book the up and down tickets without any further delay.  They should reach Guwahati before 08-30 A M on 27th April 2013. They can leave the camp only after 6 PM on 28th April 2013.  Maximum lady comrades may be included as delegates. The names of the delegates attending the camp should be intimated to the respective General Secretaries before 31st March 2013..  Delegate fee per head is fixed as Rs 600/- (Rs six hundred only) Exact venue and programme notice will be sent separately.


All General Secretaries are requested to instruct their circle Secretaries suitably to immediate follow up action.

Posted by R.SEETHALAKSHMI at 4:02 PM No comments: