Posted by R.SEETHALAKSHMI at 12:31 PM No comments:

The Women Sub-Committee of the Confederation of CG Employees and Workers calls upon the entirety of leadership of all Affiliated Organizations to launch effective Programmes like Seminars, Conventions, Special Meetings of Women Workers all over the country on behalf of their respective organisations to befittingly celebrate the "INTERNATIONAL WOMEN DAY". This is an occasion to approach all women members to unionize them in our unions and educate them as well all other menfolk about the rights and privileges of women employees as well as their special problems encountered at the work spots and in society. Please send your reports to the headquarters of Confederation after observing them effectively.
Com. Gita Ghoshal - Chairperson  & Com. C P Shobana   - Convenor.Women Sub Committee
Confederation of CG Employees and Workers
Posted by R.SEETHALAKSHMI at 1:56 PM No comments:

Enhancement of Vaious Allowances by 25%& 50% Increase 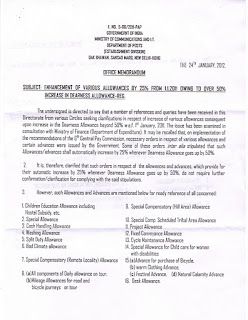 Posted by R.SEETHALAKSHMI at 1:27 PM No comments:

Posted by R.SEETHALAKSHMI at 4:39 PM No comments:

This is to give notice that the employees who are members of the affiliates of the Confederation of Central Government employees and workers will go on one day's strike on 28th February, 2012.  The charter of demands in pursuance of which the employees will embark upon the one day strike action is enclosed.

2)         Concrete measures for linkage of employment protection with the concession/incentive package offered to the entrepreneurs,

3)        Strict enforcement of all basic labour laws without any exception or exemption and stringent punitive measures for violation of labour laws.

5)         Creation  of a National Social Security Fund with adequate resources in line with the  recommendation, of NCEUS and Parliamentary Standing Committees on Labour, Stoppage of disinvestment in Central and State PSUs, the  Central Trade Unions also demand immediate  action  by the Govt. of India to en sure:-

8)         Remove the ceilings on payment and eligibility of Bonus, Provident Fund; Increase the quantum of gratuity.

10)       Compulsory registration of trade unions within a period of 45 days and immediate ratification of ILO conventions 67 and 96.

2.   Fill up all vacant posts and create posts on functional requirements

4.   Regularize the GDS, daily rated workers, contingent and casual workers by brining about a definite scheme of regularization.

6.  Stop the move to introduce the productivity linked wage system; Performance related pay; introduce PLB to in all Departments; remove the ceiling of emoluments for bonus computation.

7.  Settle all items of anomalies (including the MACP related anomalies) raised in the National and Departmental Anomaly committees within a fixed time frame of two months; set up the anomaly committees in those Departments where it has not been set up till date with the Standing Committee members of the National Council; convene the meeting of the Departmental Council in all Ministries/Department once in three month as envisaged in the JCM Scheme

8.  Make the right to strike a legal right and stop curtailment of T.U. rights

10.Raise the interest rate for GPF. Revise the OTA and Night duty allowance and stitching and clothing rates of uniforms

11.Merge DA with Pay for all purposes including pension as and when the DA rates croses the 50% mark.

Dear Comrade,
"MAKE THE STRIKE ON 28TH FEB. 2012 A GRAND SUCCESS'
ENSURE MASSIVE PARTICIPATION OF CG EMPLOYEES.
The members of the National  Sectt. of the Confederation available at Delhi met today and decided to launch a campaign to elicit the full participation of Central Govt. Employees in the 28th February, 2012 general strike being organized jointly by all the Trade Unions in the Country against the Government's Economic policies.  It is decided that the National Sectt members must be the observers in the campaign meeting at various Stations.  Appended to this Circular is a list of stations where the meetings are to be organized.  The comrades whose names are indicated against each station will make arrangements for visiting those places on the specified dates.  Arrangements for the stay of the visiting comrades will be made by the respective State Committees.
The Secretaries of the State Committee will convene a meeting of the members of the affiliates on the specified date.  It must be ensured that the State/ Circle Executive members of each affiliate is present in the said meeting apart from other members.  Ensure that large number of members attend the meeting.  It must be made mandatory that the members of the Managing/Executive Committee do attend the meeting without fail.
We send herewith draft Strike notice addressed to the Cabinet Secretary, which would be submitted to him by the Confederation CHQ.  Similar notices will be prepared and submitted by each affiliate to their heads of Department or Secretary to the concerned ministry as the case may be.  On 10th February, 2012 demonstrations will be organized in front of all Offices with full participation of all members and the concerned Secretary will  hand over a copy of the notice submitted by the affiliates to their heads of Department.  The affiliates will submit the notices on or before 5th February, 2012.  Confederation CHQ will serve the strike notice on the Cabinet Secretary on Ist February, 2012.
Apart from placing this Circular letter on our website we are sending it by post, the receipt of which  may be acknowledged through an SMS to the following number:
K.K.N.Kutty-"98110 48303".
With greetings,
Yours fraternally,
(K.K.N.Kutty),Secretary General.

Posted by R.SEETHALAKSHMI at 11:36 AM No comments: 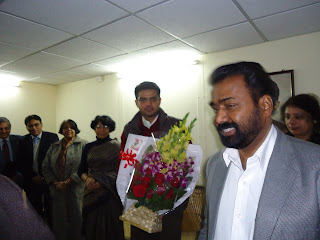 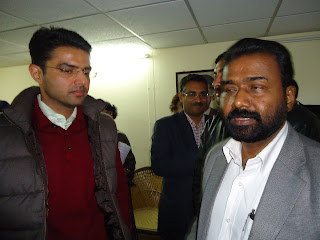 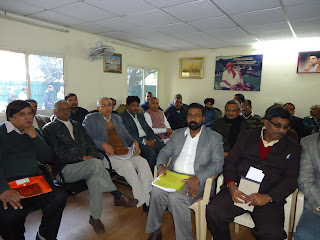 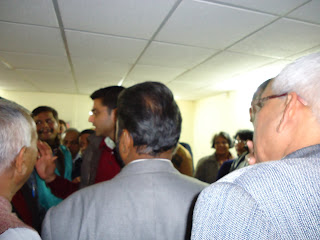 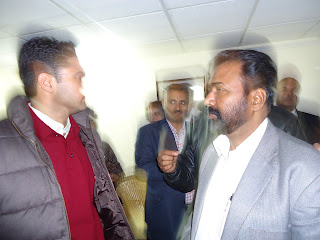 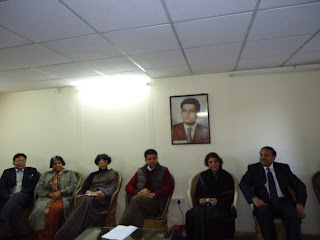 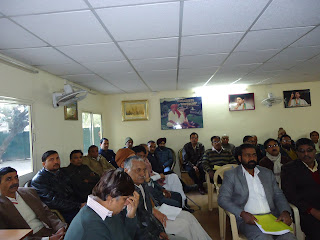 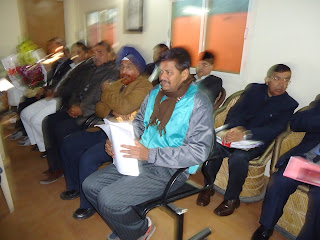 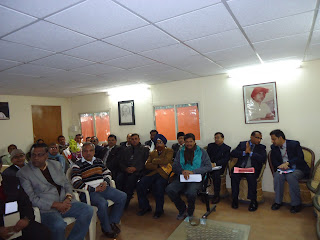 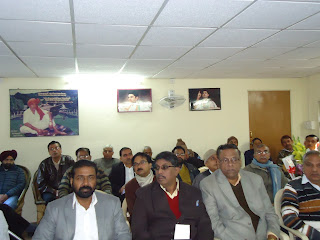 Posted by R.SEETHALAKSHMI at 3:22 PM No comments:


MEETING WITH MINISTER
Meeting with Sri. Sachin Pilot, Hon’ble Minister of State of Communications, was held today (21.01.2012) at 11.00 AM. Meeting lasted for 30 minutes. The staff side presented a memorandum to the Minister, containing the issues which needs Minister’s intervention. (See the copy published in the website). Minister agreed to examine each case on its merits and take early decision. The following issues were discussed with the Minister, in detail.
(i) Issues relating to Gramin Dak Sevaks
(ii) Issues relating to casual, Part-time, Contingent employees
(iii) Revision of overtime allowance
Regarding GDS issues like status, promotion etc. Minister assured to examine the cases in detail and taken a decision at the earliest. Regarding reduction of existing allowances of GDS, the Minister gave on the spot instructions to the Secretary, Department of Posts, to issue orders protecting the existing TRCA in full. Further regarding cash handling point Minister directed Secretary that it should be finalized before 31st January 2012. He assured that the other issues like Bonus ceiling, providing norms for left out items etc. will also be given sympathetic consideration. Regarding casual labourers issues Minister gave direction to the Postal Board to expedite the orders. Minister further assured that he will definitely call for the files relating to the other items mentioned in the memorandum and an indepth examination of the issues will be made and decision taken early.
The staff side thanked the Minister for giving us an opportunity to present our cases in front of him. The staff side was represented by Com. M. Krishnan (S/G, NFPE), Sri. D. Theagarajan (S/G, FNPO), Com. K. V. Sridharan, (G/S, P3, NFPE), Com. L. D. Kaushik (P3, FNPO), Com. Ishwar Singh Dabas (G/S P4, NFPE) Com. Ashok Sharma (P4, FNPO), Com. Giriraj Singh (G/S, R3, NFPE), Com. Devendra Kumar, Com. Pawan Kumar (R3, FNPO), Com. P. Suresh (G/S, R4 NFPE), Com. Satish Chander (R4, FNPO), Com. Pranab Bhattacharjee (G/S, Admn. NFPE), Com. S. B. Yadav (AIPAEA), Com. O. P. Khanna (G/S AIPAOA), Com. S. S. Mahadevaiah (G/S AIPEDEU), Com. Gautam Das (Org. Secy., NUGDS), Com. R. N. Parashar (ASG, NFPE).
Posted by R.SEETHALAKSHMI at 3:17 PM No comments: 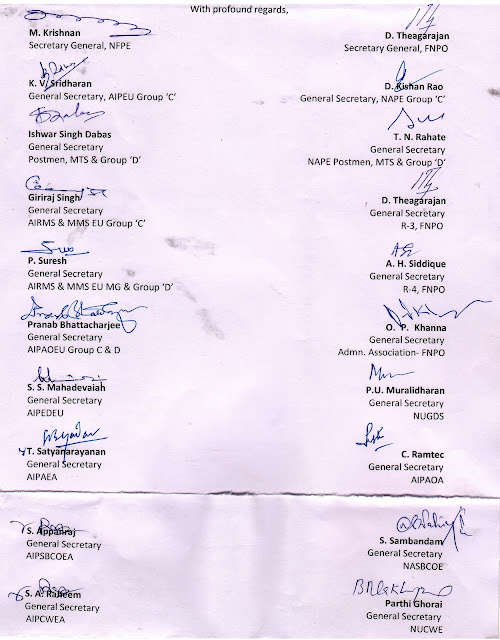 Posted by R.SEETHALAKSHMI at 3:12 PM No comments: