NC JCM(Staff Side) has decided to meet all the standing committee members before the final Meeting with 7th Central Pay Commission will be held on 9.6.2015. And National Anomaly Committee meeting on 12 pending NAC items also expected to be held on 9th June 2015.

Shiva Gopal Mishra
Secretary
National Council (Staff Side)
Joint Consultative Machinary
For Central Government Employees
13-C. Ferozshah Road. New DelhI – 110001
E Mall :nc.jcm.np@gmail.com
No.NC/JCM/7th CPC/2015
Several lakhs of workers in the organised sector will benefit as the Narendra Modi government is set to raise the salary threshold for mandatory bonus for workers from Rs 10,000 a month at present to Rs 15,000 and the minimum bounty from an annual Rs 3,500 now to Rs 4,500. The proposal, agreed to by employers’ associations at a recent meeting of an inter-ministerial group, would require Parliament’s approval as the Payments of Bonus Act, 1965, requires to be amended for this purpose.

While the minimum bonus is a legal liability on the firms concerned, whether or not they make a profits, these firms are also required to pay the workers a higher bonus if their “allocable surplus” exceeds the amount payable as minimum bonus, subject to a cap (20%) of the salaries.
If the new proposal takes affect, the maximum bonus payable by profit-making ventures would be close to Rs 11,000 as against Rs 8,400 now. 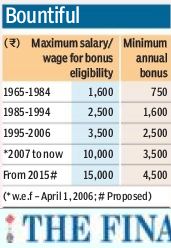 The salary ceiling for mandatory bonus eligibility was last fixed in 2007 and made effective retrospectively from April 1, 2006. While industry associations demanded exempting sick units from the requirement of paying bonus, trade unions have pitched for removal of the ceilings as “profits are not capped”, official sources said. The unions also asked for extending the benefit to workers under the Industrial Disputes Act, they added.
The revision of the bonus eligibility and the amounts is being done by factoring in the relevant price increases, the gauge used being the consumer price index-industrial workers or CPI(IW). This index stayed in the range of 6.4-12% since 2008. After hitting as high as 12% in 2010, CPI(IW) has maintained a roller-coaster ride — it eased to 8.9% in 2011 before rising to 10.9% in 2013 and dropping again to 6.4% in 2014. In the current calendar year, it has slowed almost consistently from 7.2% in January to 5.8% in April. 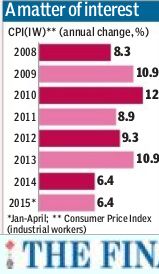 An estimate is two-thirds of the 6 crore organised sector workforce in the country are eligible for the mandatory bonus given their salary levels. Analysts, however, say that actual number of beneficiaries could be less as many units practically circumvent the norm.
Under Section 10 of Payments of Bonus Act, “every employer (as defined in the Act) shall be bound to pay to every employee in respect of every accounting year, a minimum bonus which shall be 8.33% of the salary or wage earned by the employee during the accounting year”. All factories and establishments employing 20 or more persons are expected to pay the bonus compulsorily, provided the worker has worked in the establishment for at least 30 days. Employees in Life Insurance Corporation, seamen, dock workers and university employees are outside the Act’s ambit.
Although the country witnessed high inflation between 2009 and 2014, the move to raise the bonus amounts comes at a time inflation has come down (consumer price inflation is now below 5%). Consumer confidence is yet to be restored to the pre-2008-09 levels, while in recent months rural income growth has slowed.
Posted by p4chq blog.spot at 2:29 PM