Sub: Counting of service for pensionary benefits in respect of temporary status casual labourers whose services were later regularized.

Sir,
I am writing this letter to bring your kind attention to certain discrepancies observed in calculation of eligible service for retirement benefits in respect of officials whose services were regularized after rendering many years as temporary status casual laboureres. Kindly examine the matter with reference to the following Govt. orders issued by our Department:

The GO at sl. No.1 above reads as follows: “Temporary status would be conferred on the casual labourers in employment as on 29.11.1989 and who continue to be currently employed and have rendered continuous service of last one year; during the year they must have been engaged for a period of 240 days (206 days in the case of offices observing five days week)”…….

“50% of the service rendered under Temporary Status would be counted for the purpose of retirement benefits after regularization as a Group D official”.

Further the GO at Sl. 2 (issued on 23.02.1993) reads as follows:        “In compliance with the above said directive of Hon’ble Supreme Court it has been decided that the casual labourers of this Department conferred with temporary status as per the scheme circulated in the above said circular No. 45-95/87-SPB.I dated 12.04.1991, be treated at par with temporary Group D employees w.e.f. the date they complete 3 years of service in the newly acquired temporary status as per they above said scheme. From that date they will be entitled to benefits admissible to temporary Group D employees such as:  ………………….

“(3) Counting of service for the purpose of pension and terminal benefits as in the case of temporary employees appointed on regular basis for those temporary employees who are given temporary status and who complete 3 years of service in that status while granting them pension and retirement benefits after their regularisation”.
From the above rulings it may be seen that the qualifying service of officials who have been conferred with temporary status while working as casual labourer and later regularized as Gr.D is to be counted as follows:

1. From the date temporary status was conferred (according to the GO dated 12.04.91) till they acquire the status of “at par with temporary Gr.D” (i.e 3 years from the date of acquiring temporary status Gr.D casual labourer:
50% of this period is to be counted as qualifying service for calculating pensionary benefits.

100% of the service during this period is to be counted for calculating pensionary benefits, as in the case of temporary Gr.D employees appointed on regular basis. (As per  GO dated 23.02.1993).

I am quoting an example of wrong calculation of service for retirement benefits in respect of an offficial retired on 31.05.2017 in Kerala Circle. According to the Govt. orders mentioned above, his services is to be calculated as under:

I shall be thankful, if you would kindly look in to the matter and cause issue of necessary instructions to all concerned to ensure justice to these retired officials who have only very few years of regular service  after rendering many years of service as casual labourers, temporary status casual labourers etc.

NFPE HQ extends warm greetings and Congratulate him on his promotion 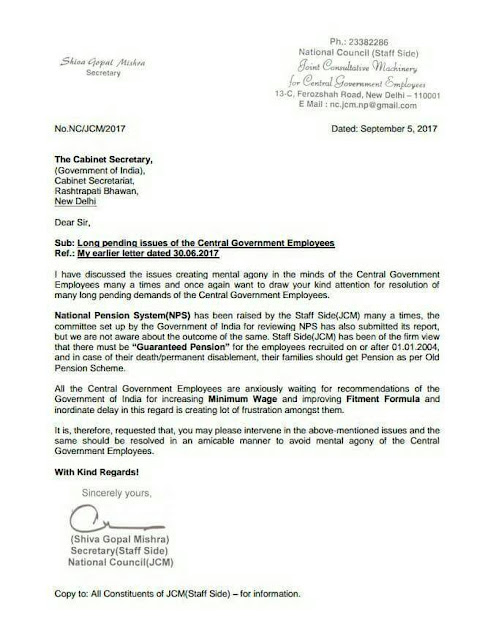