The national economy is slowing down. The adverse effects are already being felt by the workers in unorganised as well as organised sectors in the form of large scale retrenchment and closures. In the name of the recession, the Central Government is taking steps such as reducing corporate taxes, and giving them big bonanza to the tune of Rs.1.45 lakh crores from the national exchequer while not a single penny is spent to ensure job security or employment allowance to the workers. The government measures are supply-side, when all the economists are unanimous that the crisis is on the demand-side.

While the Central Trade Unions are jointly demanding a national minimum wage of Rs 21000/- pm, pension to all, scrapping of NPS and restoration of the old pension scheme, control on price rise in essential commodities and for universal public distribution system, demanding generation of new jobs and filling up of sanctioned posts, regularisation of Scheme Workers in Government posts, of contract workers working against regular posts, ensuring equal pay for equal work, strengthening of Welfare Boards for Unorganised Sector workers, increased budgetary provision for MNREGA and agriculture, that will put money in the hands of the toilers and give boost to the economy, the Central Government is pushing codification of Labour Laws, allowing Fixed Term Employment, privatisation of PSUs, allowing 100 percent FDI in railways, defence, coal and other sectors,  bank mergers and so on, that will lead to massive redundancies and extreme exploitation of workers. Now the Central Government has started reducing the contributions that the employers have to pay under the Provident Fund Act and the Employees State Insurance Act, justifying the move saying, this will increase the take-home pay of the workers. The Government openly states that these steps are being taken in the name of “ease of doing business”. The Government boasts that India’s ranking is going up in the World Bank Index of “Ease of doing business”. All this is being done at the expense of the working people. 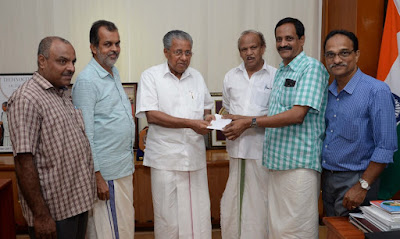 COM.P.K MURALI DHARAN KERALA CIRCLE COORDINATION  COMMITTEE CONVENOR IS HANDING OVER A CHEQUE AMOUNTING RS 16,70,850 ( SIXTEEN LAKH SEVENTY THOUSAND EIGHT HUNDRED FIFTY ) TO THE CHIEF MINISTER OF KERALA AT HIS CHAMBER BEING THE DONATION TO THE CHIEF MINISTER'S DISASTER RELIEF FUND.THE AMOUNT HAS BEEN COLLECTED FROM THE NFPE MEMBERS OF KERALA TO HELP THE VICTIMS OF THE FLOOD 2019 & TO REBUILD KERALA.

CONFEDERATION OF CENTRAL GOVERNMENT EMPLOYEES & WORKERS CENTRAL HEADQUARTERS
IST FLOOR, NORTH AVENUE POSTOFFICE BUILDING, NEW DELHI-110001
No. Confdn/NS/2016-19                                                                       Dated-18.11.2019
IMPORTANT CIRCULAR
To
1.        All National Secretariat Members (CHQ Office Bearers)
2.        All Affiliated organisations
3.        All General Secretaries of C-O-Cs.
CONFEDERATION NATIONAL SECRETARIAT CALLS UPON ENTIRE CENTRAL GOVERNMENT EMPLOYEES
(including Gramin Dak Sevaks and Casual/Contract Workers)
TO MOBILISE AND PARTICIPATE IN THE
2020 JANUARY 8th NATIONWIDE STRIKE
ORGANISE MASS DHARNA AND DEMONSTRATIONS AND RALLIES
AT ALL IMPORTANT CENTRES AND STATE/DISTRICT/
DIVISIONAL HEADQUARTERS ON 20th DECEMBER, 2019.
*        Strike to be organised on 10 points Charter of demands of Confederation (attached herewith) and also the common demands of workers adopted in the National Convention of Workers.
*        First and most important demand to be emphasized is “SCRAP NPS AND RESTORE OPS”.
*        Each affiliated organisation should independently chalkout intensive campaign programmes to mobilise their entire membership to participate in the strike.  Campaign tour programmes of leaders of each affiliate should be chalked out immediately.  This is most important and urgent.
*        Campaign tour programmes of National Secretariat Members of Confederation will be published shortly.
*        Draft copy of the pamphlet to be distributed among all the Central Government employees will be published in the Confederation website shortly.  C-O-Cs and Affiliates at state/district level to bring out pamphlets in respective vernacular, with additions/modifications if necessary.
*        State C-O-Cs should publish Posters with Confederation Charter of demands.
*        Strike notice along with Charter of demands will be served on 12th December, 2019.
Confederation Central Headquarters will serve strike notice to Cabinet Secretary.  All Affiliated organisations should serve strike notice to their respective Departmental heads.  Copy of the strike notice should be submitted to all lower level authorities also at State/District/Divisional level with mass demonstrations and gate meetings.
*        Affiliated organisations should send copy of the strike notice served by them to their Departmental heads, to all their lower units and also publish the same in their websites.
*        State/District C-O-Cs should plan their own campaign programmes and mobilisation meetings.
*        Confederation Central Headquarters has already written to the Secretary General of Confederation of Central Government Gazetted Officers Organisation (CCGGOO) requesting to participate in the 8th January 2020 strike.
*        Message of the strike and strike demands should reach each and every Central Govt. employee including Gramin Dak Sevaks and Casual, Part-time contingent, daily-rated and Contract Workers.
*        All Affiliates and C-C-Cs should ensure maximum participation of Central Govt. employees in all the campaign and mobilisation programmes of Joint Action Council of Central Trade Unions and Independent Federations also.
*        As in the past, Government may issue circulars, threatening the employees who participate in the strike.  Ignore all such circulars and join the strike with courage and determination.  Don’t believe in rumours.  All information related to the strike will be published in Confederation website www.confederationhq.blogspot.com
*        Mass dharna at all important centres and also at State/District/Divisional headquarters may be organised on 20th December 2019, with maximum participation of Central Govt. Employees.
*        Give maximum publicity through local media, social media and websites.  Send photos and reports by whatsapp or Email to Confederation Headquarters.
*        Central Government Pensioners Associations may be requested to particpate in all mobilisation programmes and also to organise solidarity programme on 8th January, 2020.
Remember, all our existing benefits and rights are achieved through struggles and sacrifices only.  No strike action will go in vain.  No sacrifice will go in vain.  We will fight and we will win.
II.       National Conference of Confederation of Central Government Employees & Workers:
As already informed to all in the Circular dated 01-08-2019, the next National Conference of Confederation of Central Government Employees & Workers will be held at NAGPUR (Maharashtra) on 07-02-2020 and 08-02-2020 (7th & 8th February 2020; Friday and Saturday).  Delegate fee per head is Rs.1,000/- (Rs. One thousand only).  In addition to delegates, visitors are also allowed to attend the Conference on payment of Rs.1,000/- (Rs. One thousand only) per head.
All Affiliated organisations and C-O-Cs are requested to ensure maximum participation of delegates and visitors in the National Conference, including maximum Lady delegates and visitors.
Please book the travel tickets of the delegates and visitors well in advance.  Last minute, confirmed tickets will not be available.
C-O-C, Vidharbha Region, Maharashtra, Nagpur, is hosting the National Conference.  Contact Number: Com: Nilesh D Nasare, General Secretary, C-O-C, Vidarbha Region, Nagpur & All India Organising Secretary, Confederation CHQ, Mob: 09850354898.
Women’s Sub Committee of the Confederation will be re-constituted in the Conference and New Office Bearers will be elected.
The names and mobile numbers of leaders, delegates and visitors attending the National Conference may be intimated to the Reception Committee on or before 31-12-2019.  This is required for arranging accommodation.
C-O-C Mumbai, C-O-C Nagpur and nearby states C-O-Cs may ensure participation of more delegates/visitors/lady comrades.
Formal notice of the National Conference will be issued shortly.
Number of Delegates and Quota Remittance:
Number of eligible delegates of each Affiliated organisation and C-O-C is decided based on the quota remitted.  The National Secretariat meeting of Confederation held at Hyderabad on 19th October 2019, has decided that the subscription/quota dues list of affiliates will be placed in the Comnfederation website by the Financial Secretary shortly and all will be once again asked to pay out the arrears by 20-12-2019.  On the basis of remittances received thereupon, voting rights will be compiled and exhibited in the website.
Contact number of Com.Vrigu Bhattacharjee, Financial Secretary, Confederation CHQ - 09868520926 and 09013163804.
All the Affiliated organisations and C-O-Cs are once again requested to remit the subscription/quota dues on or before 20-12-2019 without fail and ensure participation of maximum delegates and visitors in the National Conference.
LET US MEET AT NAGPUR AFTER THE HISTORIC 2020 JANUARY 8th STRIKE.
LET US STRENGHTEN OUR UNITY FURTHER.
UNITY FOR STRUGGLE AND STRUGGLE FOR UNITY.
Fraternally yours,
M. Krishnan,
Secretary General,
Mob: 09447068125
Email: mkrishnan6854@gmail.com