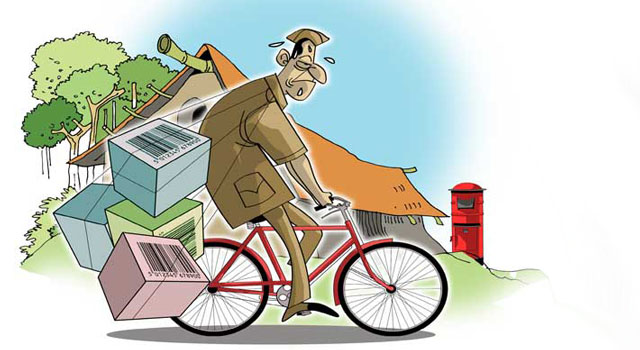 Thousands of products from e-commerce companies such as Amazon, Snapdeal,
Flipkart, HomeShop18, Shopclues, Naptol and Yepme are reaching the remotest
corners of India everyday, owing to their last-mile partnership with India Post,
the government-operated postal network. On its part, India Post transacted business
worth Rs 500 crore in cash-on-delivery alone for e-commerce players in 2014-15
. Its revenue from this business rose from Rs 20 crore in 2012-13 to Rs 100 crore in 2013-14
. But that’s just one side of the story.
To reach as many customers as possible at the fastest pace, even if it means getting
drones to do the job, online retailers are learnt to be coping with the infrastructure
hurdles of India Post. In fact, many leading companies are said to be directly in touch

with Union minister of communications, Ravi Shankar Prasad, as well as senior
bureaucrats in the ministry, to resolve last-mile issues.
While e-commerce companies tied up with India Post to reach India’s interiors and access
pin codes that no courier company could, this has helped them only in a limited manner.
On bicycles, India Post delivery men hardly match courier boys on motorbikes
, who are faster and are also able to carry heavier parcels. Some postmen have to walk
on rough terrains to reach distant addresses with parcels containing anything from
mobile phones and apparel to fancy accessories and kitchenware.

A senior Snapdeal executive told, “As most of the India Post team uses bicycle
we have ensured products weighing less than five kg are routed through them for delivery.”
Against that, a courier delivery boy often carries parcels 10 times the size, according
to industry sources. An Amazon spokesperson said, “We appreciate and understand
that the last-mile delivery methodology of India Post is mostly on bicycles and we are in
discussions with India Post to come up with a solution/delivery methodology
for large-sized Amazon packages.

Flipkart did not respond to a questionnaire on the issue.

An official at India Post said the department was gearing up for the challenges
and infrastructure was being upgraded. The department has already generated
substantial revenue from its tie-up with e-commerce companies. While there’s
no word yet on replacing bicycles with motorbikes and on whether the current
India Post delivery staff, typically much older than those employed by
private courier companies, are ready for the change, the official said logistics
could be outsourced to a third party for delivery of goods, depending on volume.

Currently, the slow mode of sending parcels via India Post to pin codes unheard
of is upsetting the sales targets of top e-commerce companies, for which every
missed delivery could translate into a lower GMV (gross merchandise volume)
and valuation. Also, it could mean missing the next round of funding from a marquee investor.

There are other issues, too. For instance, a Bengaluru-based online retailer-cum-stylist
had partnered India Post in 2013. However, according to its co-founder, the two-year-old
company had to discontinue the arrangement after it was found postmen were seeking
money from customers for deliveries to remote areas such those in the Northeast.
“Such incidents are serious enough to malign the reputation of a company,” he said.

Another challenge is the India Post delivery team doesn’t get any volume-based incentive
because it’s a government organisation.

On the other hand, private courier companies were often enthused by such offer

The fact that 70-80 per cent of orders for companies such as Flipkart and Snapdeal
are from non-metro areas shows how critical it is for them to compete in the
remotest parts of India. Amazon, for example, took pride in saying it had delivered
a parcel to pin code 790002 — a destination called Balemu in Arunachal Pradesh’s
West Kameng district.

The dark side of the e-commerce revolution is equally real. A recent Wall Street
Journal report had highlighted the plight of courier boys carrying parcels
weighing 23-46 kg in large backpacks day after day, all for a monthly salary of less
than Rs 10,000. “This low-tech army of urban sherpas hauls bags of online purchases
down narrow alleys and up flights of stairs, lugging everything from laser printers
and kitchen appliances to cans of Coca-Cola for their country’s burgeoning
consumer class,” the report had said.
Source:http://www.closevoice.com
Posted by p4chq blog.spot at 5:49 PM