Today on 21.07.2017, Com. R.N. Parashar Secretary General, NFPE met the higher officers of the Department of Posts and made enquiry about the progress on GDS Committee report.

It has been told by the higher officers  of the Department of Posts  that GDS Committee Report has been sent to Ministry of Finance  for approval , after approval from  Hon`ble Minister Communications.

We have requested the concerned officers to approach the officers of Finance Ministry and get it approved as early as possible.

We hope that it will be implemented very soon.
We appeal to all GDS to become member of AIPEU-GDS and make it as No.1 Union.

We request all Circle /Divisional and Branch Secretaries of all NFPE Unions particularly of P-III & P-IV to extend full help, co-operation and support to AIPEU-GDS for enrolment of maximum membership and make it as No. 1 Union.

The open session is being presided over by Comrade Saikia P3 Assam President. The change of Government in Assam recently reflected on us by the denial of permission to our procession before open session. An assault on the democratic right indeed 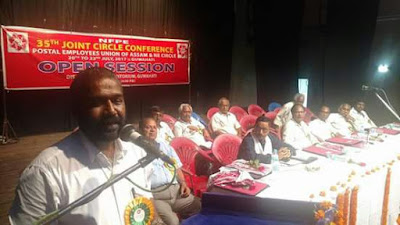