AN ODE TO OUR LEADER 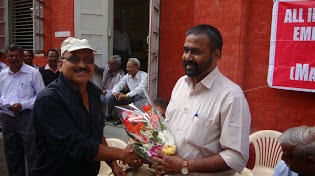 “Two roads diverged in a wood, and I—
I took the one less traveled by,
And that has made all the difference.”

COPIED FROM AIPAEA WEBSITE
Soon, attendance of govt staff to be tracked online through attendance.gov.in

In what could be a revolutionary step towards monitoring and tracking the work of government officials, the NDA government has launched an “attendance website” to serve as a centralised database for all central government employees.

Though the website, attendance.gov.in, is still in the process of being developed, officials said it is expected to be modelled on the lines of similar websites of the Jharkhand government and the Department of Electronics and Information Technology.

To illustrate, the home page of the Jharkhand government’s attendance website gives the total number of employees present on the given day, along with graphical representations of “real-time attendance” and statistics on the percentage of people logging into office during different time slots, giving an idea of how many officials come to office during the designated timings. Further, a search for any REGISTERED

employee yields complete details, along with the employee’s attendance/leave status.

Officials said the Centre’s website is likely to emulate most of these features and is expected to be as open to the public. “This level of open tracking takes transparency to another level, a key focus of this government,” said an official.

The database for all central government staff will be maintained centrally with a unique six digit ID provided for each employee, based on either the last six or first six digits of the Aadhaar number. Currently, the website has over 16,000 registered users, spread across 113 organisations. The maximum number of officials registered currently are from the Planning Commission. There are no active users or active devices yet.

For an organisation/ department to be registered, the nodal officers of that department will have to login to the website and create a master list of locations of their offices, designation of their offices and divisions/ units/ groups within their organisation. Following this, each employee can start REGISTERING

online by submitting the relevant details along with Aadhaar numbers.

Exclusivity of Central Government Health Scheme to be phased out
Health Minister ushers in new era of transparency in departmental working.

Beginning September 1, 2014 the doors of 20 Central Government Health Scheme (CGHS) wellness centres in Delhi will be thrown open to senior citizens from among the public for free consultation.

Dr Harsh Vardhan, Union Health Minister, unveiled today a pilot project with wide ramifications for the future of public health care. There was wide criticism of the CGHS’ closed door policy towards people in need of medical help who were not family members of central government employees.

This is a pilot project for now. We will see how much demand accrues for the CGHS clinics and the ability of the clinics to handle demand from the general public before extending the service to more people in more cities,” Dr Harsh Vardhan said.

The service for senior citizens will be available on all working days between 1.30 pm and 3 pm. They will however not be given free medicines which is only for central employees.

On his first day in office, Dr Harsh Vardhan had announced that governance in all the outreach departments of the Ministry of Health would be made transparent. Within the first three months, the CGHS has completed a thorough review of its operations with the intention of identifying vulnerable spots which often OFFER

The Minister has ordered that all information regarding medical claims that are pending for more than 30 days be put on the website, http://msotransparent.nic.in/cghsnew/index.asp. Over the years complaints had been piling up over the opaqueness of the process of reimbursing claims.

There were also complaints of CGHS doctors prescribing branded drugs beyond the approved list. Taking all factors into consideration, it has been decided that all beneficiaries and the public at large ought to know which the drugs are on the list and so they will be on view on the above-mentioned website, the Health Minister stated.

Dr Harsh Vardhan reiterated that henceforth only 1,447 generic and 622 branded medicines will be prescribed. Exceptions will be made only for patients suffering from cancer and similar diseases.

Additionally, it has been decided that CGHS beneficiaries will be provided with medicines for a maximum of one month. In case they are going abroad for extended periods, the medicines will be given for three months, he informed.

The CGHS doctors will be forbidden to prescribe investigations or implants that are not listed. A technical committee has been constituted to update the list of medicines, investigations, procedures, implants and other procedures of treatment.

Dr Harsh Vardhan said he is considering broad reforms in all wings of the ministry. “I encourage people, especially the media, to probe our affairs so that over time the employees realize the futility of trying to be corrupt. In addition, I will use information technology to prevent corruption at source.”
1,84,68,000 Accounts Opened in more than 70000 Camps Under Pradhan Mantri Jan-Dhan Yojana
Press Information Bureau
Government of India
Ministry of Finance
29-August-2014

Banks to hold such Camps on Weekly Basis, from 8 am to 8 pm on all saturdays to Achieve the Target of Covering Unbanked Households well in Time.

Inclusion to cover about 7.5 crore unbanked households in the country was launched here by the Prime Minister yesterday from Vigyan Bhawan. The Prime Minister has also asked that the target of opening 7.5 crore bank accounts is to be completed by 26th January, 2015.

Simultaneous launch functions were held in State Capitals and Districts through 79 Mega Camps in presence of the Union Ministers, the State Chief Ministers, MPs/MLAs and other dignitaries. In all more than 70000 camps were held all over the country and 1,84,68,000 accounts were opened.

It has been decided that henceforth, the bank will be holding such camps on weekly basis, from 8 am to 8 pm on all Saturdays so that the target of covering unbanked households is achieved well in time.

Under the scheme, a person from an unbanked household, opening an account will get a RuPay debit card with a Rs. 1 lakh accident insurance cover. An additional Rs. 30,000 life insurance cover for the accounts opened up to 26th January, 2015 was also announced by Hon’ble Prime Minister. The modalities of this additional life cover are being worked out by the Department of FINANCIAL

Beneficiaries, who already have a bank account, are also eligible to take benefits of accident insurance of Rs. 1 lakh and life insurance of Rs. 30,000 under this scheme by getting a RuPay card issued from their bank branch before 26th January, 2015.
PA/ SA EXAM- UPDATE

Schedule of Paper II (Computer Skill Test) for the following Postal Circles is as follows:

Candidates for the above mentioned Postal Circles may check their status for Paper I by Logging into the website. Candidates, shortlisted to appear in the Paper II, may download the Admit Cards

Revised Answer Keys of Paper I conducted on April 27, 2014 at Odisha (14) Postal Circle with few changes are accessible once again. Candidates may LOGIN to view till September 02, 2014.

“The average rate of retail inflation for industrial workers from July 1, 2013 to June 30, 2014 works out to be 7.25 per cent. Thus the Central government will hike dearness allowance for it employees by 7 per cent,” an official said.
He said the Finance Ministry will now put a Cabinet proposal for approval of 7 per cent DA hike from July 1 this year as the revised Consumer Price Index-Industrial Workers data for June was released by Labour Ministry on Saturday.
With increase in DA, the pensioners will also gain as the benefit provided to them as dearness relief will be hiked to 107 per cent of basic pay.
The previous UPA government had increased DA to 100 per cent from 90 per cent with effect from January 1, 2014, on February 28 on the basis of agreed formula for revision of the allowance.
However, the central government employees’ union is not very enthused by the 7 per cent hike in the dearness allowance as their long pending demand of merger of DA with basic pay has not been given heed by 7th Pay Commission and the government.
“The erosion of value of wages is unbearable at 50 per cent dearness allowance. Now it will be 107 per cent. It is high time to merge DA with basic pay to provide relief to employees,” Confederation of Central Government Employees’ President KKN Kutty told PTI.
“We had summited our memorandum in this regard to 7th Pay Commission. They forwarded it to Central Government. We have apprised about the issue to the newly elected NDA government.
But no decision has been taken so far,” he said.
With merger of DA with basic pay, the salary and allowances paid in proportion of basic pay are increased. As per earlier practise DA was merged with basic pay once it breached 50 per cent mark. But the 6th Pay Commission has disallowed that.

Posted by R.SEETHALAKSHMI at 1:23 PM