The union Government is going to amend labour laws without prior discussion with Trade Unions. Bilateral forums and tripartite bodies made for maintaining relations by way of discussions between Government,Workers and employers are being dissolved only to implement neo-liberal reforms for the benefit of multinational and national corporates and curtailing workers rights and trade union facilities.

The Rajasthan Government lead by Vasundhara Raje is being utilized as test laboratory as it has taken first step to amend labour laws i.e. Industrial disputes Act, Factories Act and contract Labour (Regulation & Abolition) Act incorporating anti worker provisions without discussion with Trade Unions. All the amendments were placed in Rajasthan Assembly on 1stAugust, 2014 and were got passed on the same day. The industrial dispute act amendment empowers employers to retrench the workers without prior permission of government upto establishment of 300 and it also denies the rights of formation of Trade Union unless they have at least 30 % membership.

The amended factory act increases the coverage from 20 workers to 40 workers in the factories without power and 10 to 20 with power? This amended Act has come as a protection cover for employer as the court cannot take cognizance on the complaints of violation of laws against the employer without written permission from the State Government. The amendment to contract Labour (Regulation & Abolition) Act keeps the employer out of purview of the Act in the establishment where up to 49 workers are employed. The amendment in apprenticeship act also gives the opportunity to employer to replace a regular worker by apprentices.

After passing these amendments in Rajasthan Assembly the Central Government Labour Ministry posted in its website the proposals to amend all these acts and introduced the Factories amendment Bill 2014 and the apprenticeship Act (Amendment) Bill 2014 in Lok Sabha and brought back in business the Labour Laws (Exemption from furnishing returns and maintaining of Registers by certain establishment) Amendment Bill 2011 in Rajya Sabha This shows that the Modi Government is also following the path of Vasundhara Raje Government of Rajasthan.

This trend of Govt. is alarming as it is developing the unilateralism and authoritarian practices . All these so called reforms and amendments in Labour Laws will empower the employers and will keep them out of purview of labour laws and this  paves the way of more exploitation of workers in so many ways.

So this is the need of the hour that all the workers whether they are in Govt. sector, in public sector or in organized or unorganized sector, require to be educated about all these changes and must be ready to fight all these onslaughts unleashed by the Govt. unitedly and compel the Govt. to reverse back the so-called reform policies which are being made in the favour of capitalist class.

It is in this background, all the Central Trade Unions including BMS,INTUC,HMS,AITUC,CITU,UTUC etc. has decided to unitedly oppose this anti-labour policies of the NDA Government . The National Convention of Workers held at New Delhi on 15th September 2014 has decided to organise nationwide campaign against the labour law amendments. The resolution adopted unanimously by all Central Trade Unions and Federations calls upon the entire working class of the country to fight out these policies at any cost. NFPE calls upon the entirety of  Postal and RMS employees including Gramin Dak Sewaks to rally behind the banner of joint plat form of Central Trade Unions and fight unitedly the unsought unleashed by the Narendra Modi Government.

No DA Merger, No Interim Relief, No Inclusion of GDS Under 7th CPC, No relaxation of Compassionate Appointment condition, No withdrawal of New Pension Scheme, No Filling up of Posts, No Removal of Bonus Ceiling, No Assurance Regarding 01.01.2014 Date of Effect of 7thCPC, No Regularisation of GDS and Casual Labour, For Each Demand the reply is NO, NO, NO, NO………………

NO DIFFERENCE BETWEEN NDA AND UPA GOVERNEMENT LET US PREPARE FOR A MAJOR INDUSTRIAL ACTION
Dear Comrades,

1.      Decided to further intensify the campaign and agitational programmes against the Governments attitude towards the legitimate demands of the Central Government Employees. It is decided to organize two hours MASS SQUATING of not less than 3000 Central Government employees on 18th November 2014, at a centrally located important place at all the state capitals. Effort should be made to ensure maximum participation of Lady comrades in the programme. Next phase of action will be decided after successful implementation of the above programme.
2.      Decided to explore the possibility of joint action with Railways (AIRF) and Defence (AIDEF) culminating in strike.

3.      Decided to participate and implement all the decisions taken in the National convention of workers organised by Central Trade Unions on 15.09.2014.
4.      Decided to organize Two days All India Trade Union workshop of Confederation at Bangalore on 2015 January 3rd and 4th. Total number of delegates will be limited to 200. COC Karnataka has agreed to host the Trade Union workshop.
5.      Decided to grant affiliation to the following two organizations.
(1)   Forest Survey of India Employees Association
(2)   Nehru Yuvak Kendra Sanghathan (NYKS) workers Welfare Association.
6.      Decided to organize Dharna in front of all Government of India Presses and Stationery offices and also in front of Government Medical stores Depot to protest against the proposed move to close down these offices. In front of Government of India Presses Dharna will be organised by Confederation on 27th October 2014 and in front of Government Medical Stores Depot dharna will be organised on 30th October 2014.
7.      Financial position of the Confederation was presented by Financial Secretary Com. Vrigu Bhattacharjee. CHQ is running with a ‘NIL’ balance. Unless and until all the affiliated Unions/Associations voluntarily clear all pending dues it will be very difficult to run the CHQ. It is decided that Financial Secretary shall issue notice to all affiliated organizations to clear the pending dues.
8.      National Secretariat calls upon all Central Government employees and also the affiliated organisatons and state COCs to make the 18th November programme a thundering success.

A meeting of Postal JCA consisting NFPE & FNPO was held at NFPE office New Delhi on 25.09.2014 which was attended by the leaders and General Secretaries of both Federations. Com. M. Krishnan, Ex-Secretary General, NFPE also attended the meeting. A review of agitational programmes was taken and action on Charter of Demands was discussed in the meeting and following decisions were taken:

1.         The Department has informed that it will send reply on the Memorandum & Charter of Demands submitted by JCA within a week. After             receipt of reply from the Department JCA will meet again and will decide further course of action.

All General Secretaries are requested to allot the quota to each Circle and ensure participation as per quota allotted.

All General Secretaries are requested to issue separate circular and send to Circle and Branch Unions directing them to participate in Parliament March as per quota allotted to them and it should be given wide publicity to make the Parliament March a grand success.

Please instruct all Circle/Divisional/Branch Secretaries to book the travel tickets of participants well in advance i.e.; from 3rd October onwards.

POSTAL JCA DECIDES TO INTENSIFY THE STRUGGLE FURTHER
20000 Postal & RMS Employees Including Gramin Dak Sevaks will March Towards Parliament on 04.12.2014

A meeting of the Postal Joint Council of Action (PJCA) was held at New Delhi on 25.09.2014 under the Presidentship of Shri D. Theagarajan, Secretary General, FNPO. General Secretaries and Other leaders of all affiliated unions of NFPE & FNPO attended the meeting. Com. M. Krishnan, Ex-Secretary General, NFPE was also present. Com. R. N. Parashar, Secretary General, NFPE placed the review report regarding the implementation of the phased programmes of action of JCA conducted so far. After detailed delebrations the following decisions are taken.

1. Secretary, Department of Posts, has informed that it will furnish the item-wise reply to the demands raised in the charter of demands to the PJCA shortly. After receipt of reply from the Department, the JCA will meet again and future course of action will be decided.

4. It is decided to invite all Central Trade Union leaders to address the Parliament march on 04.12.2014.

NFPE & FNPO calls upon all Circle/Divisional/Branch Unions to start intensive campaign and mobilization at all levels to make the Parliament March a historic success. Let us prepare for an indefinite strike if Government refuses to settle our legitimate demands.

Circle Secretaries and CHQ office Bearers of all affiliated Unions/Associations shall compulsorily attend the final celebration of Diamond Jubilee of NFPE at Dwarka (Gujarat). It will be a wonderful unforgettable, magnificent and historic event.

Please book your up and down travel tickets today itself. There are only limited reservation tickets available to Dwarka. Don’t delay Book today itself. CWC meeting of all affiliated Unions will be notified by the General Secretaries. Delegate fee is Rs. 1000/- All Circle Secretaries and CHQ office Bearers should pay the delegate fee. Reception Committee has only limited source of income and huge amount is required for two days celebration including food and accommodation.

PERIODICAL MEETING WITH SECRETARY, DEPARTMENT OF POSTS DURING DECEMBER 2014 - ITEMS TO BE SUBMITTED IMMEDIATELY - DIRECTORATE LETTER 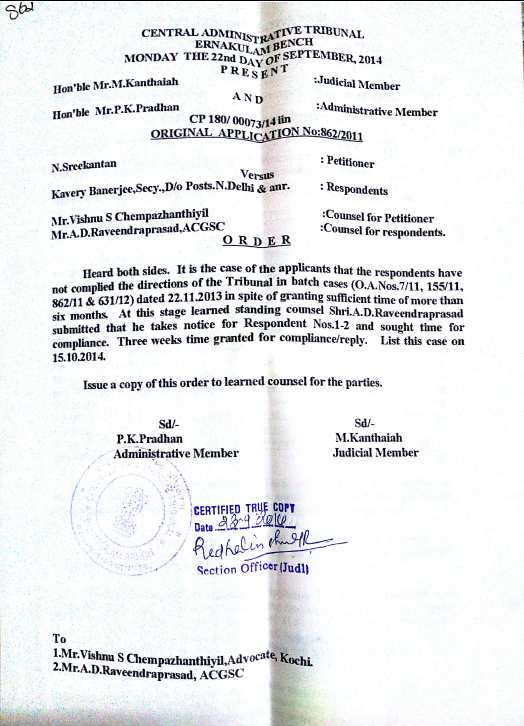 Posted by R.SEETHALAKSHMI at 11:19 AM