Finance Minister Approves Setting-up of A Committee to Examine un-Claimed Amount Remained in PPF, Post Office and Savings Schemes and Recommend how this Amount can be Used to Protect and Further the Financial Interest of the Senior Citizens.

The Union Finance Minister Shri Arun Jaitley has approved the setting-up of a Committee under the Chairmanship of Deputy Governor, Reserve Bank of India(RBI) to examine un-claimed amount remained in PPF, Post Office, Savings Schemes etc and recommend how this amount can be used to protect and further the financial interest of the senior citizens.

The Finance Minister, vide para 39 of his Budget Speech 2014-15, had announced that "a large amount of money is estimated to be lying as unclaimed amounts with PPF, Post Office, Savings Schemes etc. these are mostly out of  investments belonging to the senior citizens and on their demise, remain unclaimed for want of relevant payment instructions" and has proposed to set-up a Committee to examine and recommend how this amount can be used to protect and further financial interest of the senior citizens.

Accordingly, with the approval of the Union Finance Minister, a Committee has been set-up with the following composition:

National Savings Institute
The Terms of Reference (TOR) of the Committee would be:

·         Based on defined scope, by Reserve Bank of India, estimation of amount lying unclaimed under various scheme's (Small Savings and other Savings Schemes of banks) with Post Offices/ Public Sector Banks;

·         Procedure for bringing such unclaimed deposits to a common pool to be suggested by the Committee. Changes, if any, required to be made in the legal framework may be suggested. Committee to also suggest if such a pool should be placed within Government account or outside it.

·         Committee to recommend how this unclaimed amount can be used to protect and further financial interests of the senior citizens.

The Committee will submit its Report by 31st December 2014.
POSTAL EXAM : UPDATE AS ON SEPTEMBER 03, 2014
Schedule of Paper II (Computer Skill Test) for the following Postal Circles is as follows:

Candidates for the above mentioned Postal Circles may check their status for Paper I by Logging into the website. Candidates, shortlisted to appear in the Paper II, may download the Admit Cards

Please keep visiting the website for exam schedules for other Postal Circles & updates.


Source : http://www.pasadrexam2014.in/
ACTION TAKEN REPORT ON THE MINUTES OF THE 24TH MEETING OF STANDING COMMITTEE OF VOLUNTARY AGENCIES (SCOVA).(Click the link below for details)


INCLUSION OF GDS UNDER the purview of 7 CPC as demanded by NFPE endorsed by NC (JCM) now referred by CABINET SECRETARIAT to Dept. of Posts 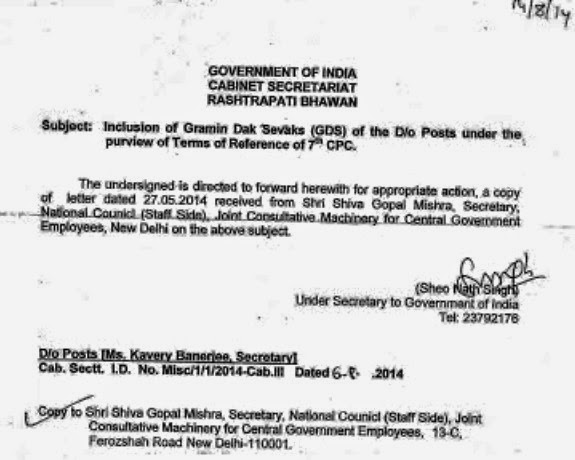 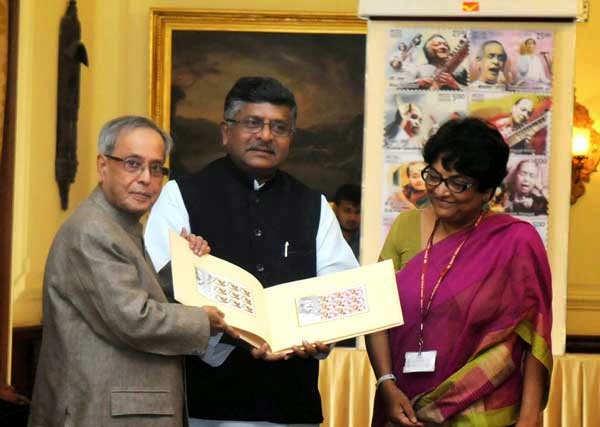 Speaking on the occasion, the President stated that as we pay tribute to eight of the greatest music maestros of contemporary India, we celebrate their life and work and their matchless legacy. These eight maestros are, without a doubt, among the tallest luminaries in the history of world music. They have not only achieved personal perfection but have made extraordinary contributions, in their respective fields, to the development and evolution of the schools of music in which their talents were nurtured and honed. Their contribution and its enrichment of our cultural heritage cannot be quantified or estimated. It is infinite in its resonance and their names will be mentioned with great reverence. Their music will be cherished by the young and old, for many decades to come.
Source : PIB
The Lokpal and Lokayuktas Act, 2013 - Submission of Declaration of Assets and Liabilities by the public servants for each year and placing the same in public domain on the websites of the Ministries/ Departments.

PREPARE FOR INDEFINITE STRIKE IF GOVT. REFUSES TO SETTLE THE DEMANDS
Twenty Thousand (20000) Postal & RMS employees including Gramin Dak Sevaks will march to Parliament on 10-12-2014, demanding immediate settlement of charter of demands submitted postal JCA to Govt. and Postal Board. All Branch / Divisional / Circle Secretaries of all affiliated Unions / Associations of NFPE & FNPO (P3, P4, R3, R4, Admin, Postal Accounts, SBCO, Civil Wing and GDS) are requested to start preparations now onwards to ensure maximum participation of members in the Parliament March. Let us make it a historic success.
GRAND RECEPTION TO COM: M.KRISHNAN AT TRIVANDRUM

As per the decision of the Federal Executive of NFPE held at Ongole on 21-08-2014, Central Working Committee meetings of all the affiliated Unions/Associations of NFPE (P3,P4, R3,R4, Admin, Postal Accounts, SBCO, Civil Wing and GDS) will be held at 23rd and 24th November 2014 at Dwaraka (Gujarat), in connectin with the concluding ceremony of one year long Diamond Jubilee Celebrations of NFPE. All CHQ office bearers/ Circle secretaries are requested to attend the meeting. Please book your tickets well in advance. Formal CWC notices will be issued by the concerned General Secretaries.
DIAMOND JUBILEE CELEBRATIONS Uttar Pradesh & Tamilnadu Circle

Circle level celebration of Diamond Jubilee of NFPE will be organised by U.P. Circle Unions of NFPE on 27th & 28th September at Mathura (UP) and Tamilnadu Circle Unions (NFPE) on 9th November at Chennai.

DIAMOND JUBILEE CELEBRATIONS
POSTAL JCA MEETING ON 25-09-2014
Meeting of the Postal Joint Council of Action (NFPE & FNPO) will held at NFPE Office, New Delhi on 25th September 2014 at 4 PM. All General Secretaries of NFPE and FNPO are requested to attend the meeting in time. Details for preparation for the Parliament March and also Future course of action will be decided in the meeting.
15th SEPTEMBER 2014 NATIONAL CONVENTION OF WORKERS AT CONSTITUTION CLUB ANNEX, NEW DELHI.
All the Central Trade Unions including BMS, INTUC, AITUC, CITU, HMS, UTUC etc have jointly decided to organise a National Convention of workers on 15th September 2014 at 10.30 AM at Constitution Club Annexe (Near Mavkankar Hall) Rafi Marg, New Delhi, to protest against the anti-labour policies of the NDA Govt. NFPE and confederation will participate in the convention.
RTP CASE UPDATE
RTP case postponed to 5th November 2014. On 22-08-2014, the case came up but Advocate for the Department did not attend. Meanwhile based on the Punjab & Hariyana High Court Judgement, Department has issued orders granting benefit of counting of RTP service to Ex-RTP employees working in Ambala RMS. We have produced this order also in our case.
POSTAL & RMS PENSIONERS - KERALA STATE CONVENTION ON 2nd OCTOBER 2014 AT TRIVANDRUM
1st Kerala State Convention of All India Postal & RMS Pensioners Association (AIPRPA) will be held at Thiruvananthapuram on 2nd October 2014, to form the Kerala State Committee of AIPRPA

Posted by R.SEETHALAKSHMI at 2:48 PM